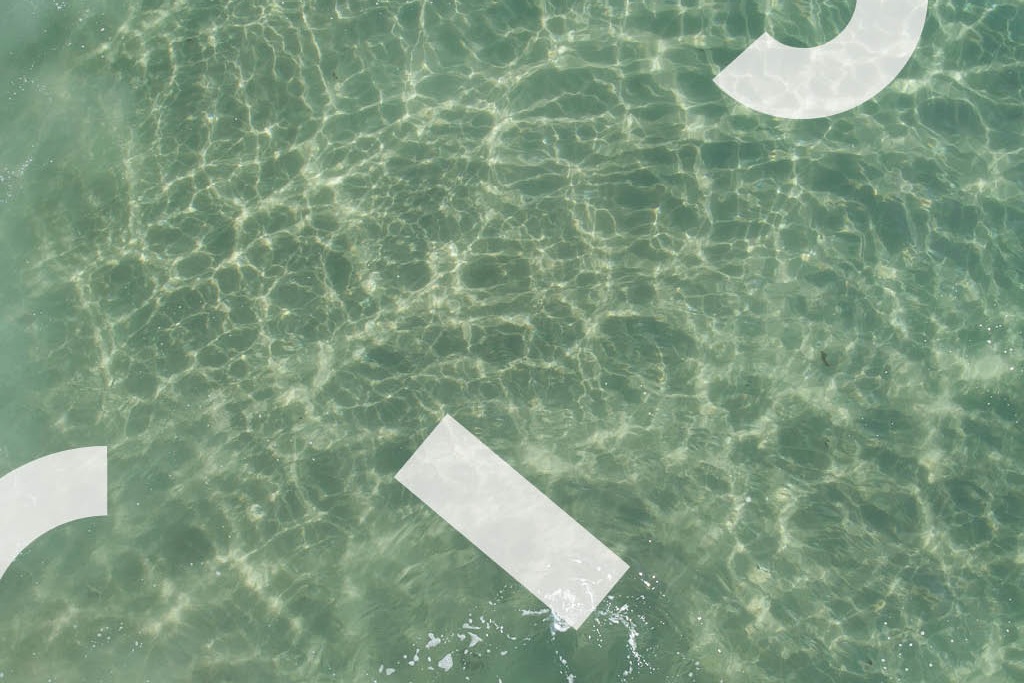 In light of the opening of the Poketo Pop-In @ Nordstrom, Poketo founders Ted Vadakan and Angie Myung spoke with Olivia Kim, Director of Creative Projects at Nordstrom, about art, design, and living in Los Angeles.

OLIVIA KIM: Hi! How are you guys?

TED VADAKAN: Good! How has your week been?

O: Oh my gosh. Well, I was in New York for market, and then I just got back, so it’s kind of been a whirlwind. But it’s been pretty good, and the weather—have you guys spent much time in Seattle?

O: I have this love affair with L.A.—I think that being raised on the East Coast, you’re naturally like, “Oh my God, Los Angeles is beautiful.” But it really is incredible. And there’s such a movement happening right now, in terms of art and design.

A: L.A.’s hard to beat, you know? There’s great food, amazing weather, and it’s just getting cooler and cooler.

A: We live in Echo Park, and the Poketo Flagship Store is in Downtown L.A., so it’s about a 10-minute bike ride.

O: Amazing. I think that downtown L.A. has had such a resurgence.

T: We moved our studio here in 2007, and since then it has really exploded. So many new business, new lofts and people coming in; it’s really exciting. And specifically where we’re at, in the Arts District, it’s so community focused. People are walking their dog, riding their bike, everyone supports and looks out for each other—it’s very neighborhood-y. We opened the Poketo retail store in 2012. We were outgrowing our studio, so, when this space opened up, we jumped on it and moved our creative office there and opened up the store. Having the store and being so close to friends, fans, and customers is amazing. We get to build the Poketo experience, highlight our artists and designers, have shows and events, and do everything else we want to do. It’s awesome to have a space in one of the most vibrant neighborhoods of Los Angeles that we can call home. 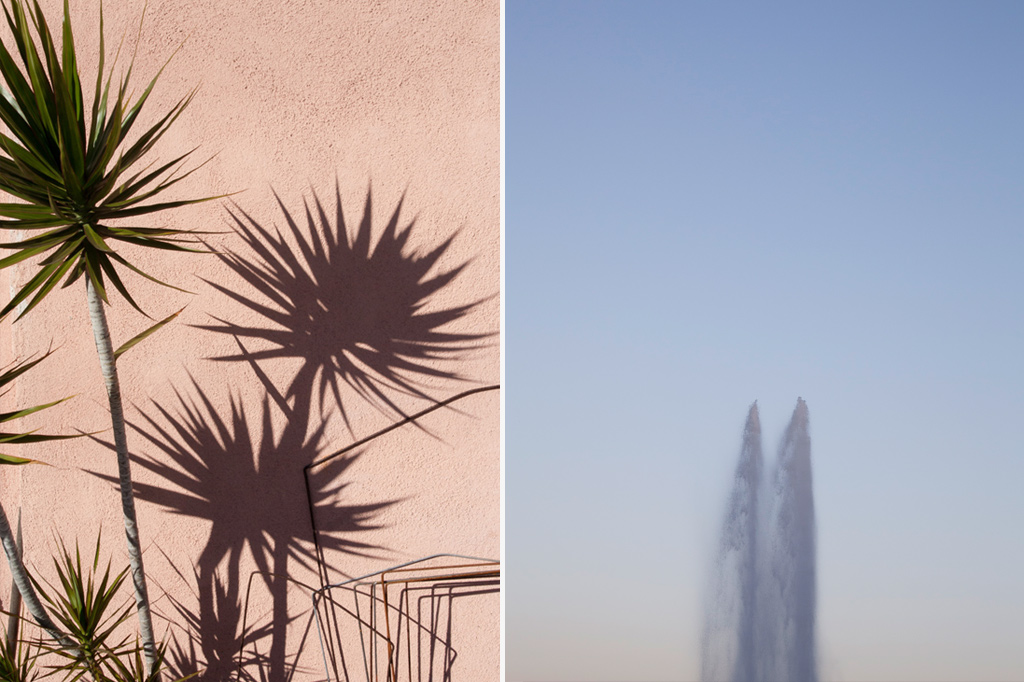 O: It makes sense that you guys would be in an environment that physically is neighborhood-y, because I feel like so much of what you guys do is about inviting your friends to do these fun workshops, to partner with you and collaborate with you.

T: Yeah, it was really important for us, even in L.A., to be in a neighborhood like this. We looked around downtown before we decided, but the Arts District is just way more relaxed, while still being close to every other neighborhood. L.A. is like all of these little pockets. You just hop from pocket to pocket, and it’s awesome.

O: Speaking of pocket to pocket—the name of your shop, Poketo, is inspired by your Korean grandmother, right?

A: I named it after the way my grandmother pronounces pocket: “poe-KEH-toe.”

T: Our very first product was a wallet, and when we were thinking of names, we thought of Angie’s grandma, and how she pronounced pocket as “Poketo.” It’s a fun word, and a cool name… it just fit.

O: So your first product was a wallet. How shortly after that did you guys evolve into all of this amazing stuff that you have now?

T: We launched the wallet with an art show. It was about bringing our friends together and having a good time. Originally, it was more just this side gig, a fun project that we would do—throw an art show, make products with our friends, invite our friends and DJs. But we didn’t want to be pigeonholed as being just a wallet company, so we thought about how to extend what we were doing—taking the idea of art for your everyday life and really making it every day. That’s when we started to get into apparel, housewares and stationery. Things that we would have in our own lives and use—stuff that we would be stoked on, and our friends would be stoked on. 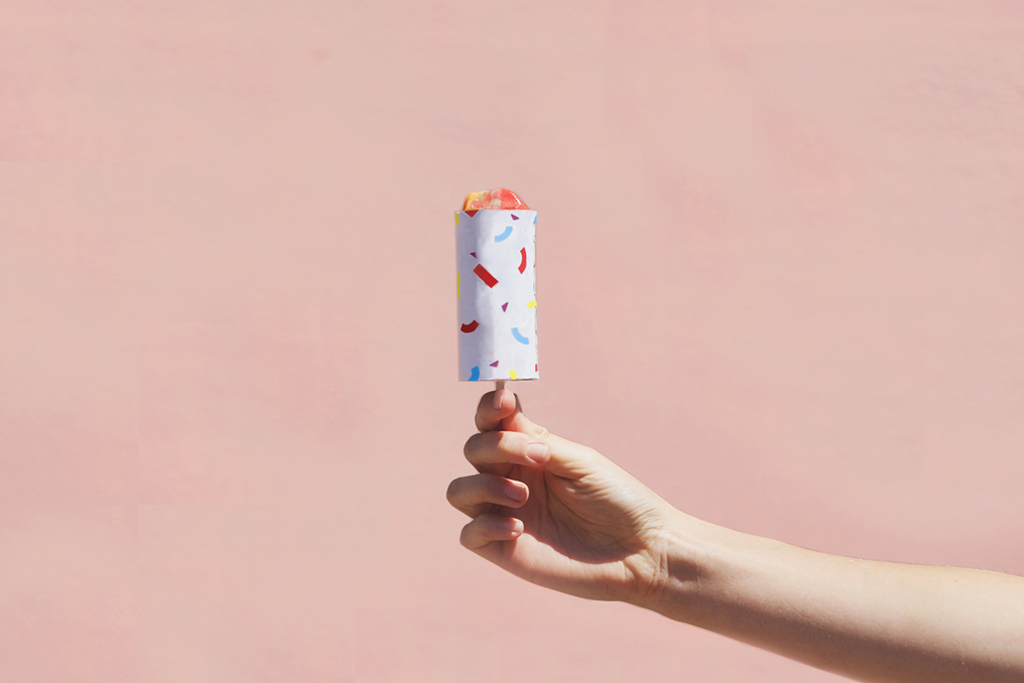 O: It’s funny, because how I found you guys in L.A. several years ago was that I had seen you first online, and I was like, “This is my dream come true,” because it’s practical stuff that’s so part of my everyday. Everything was so cute and charming and reminded me of growing up and going to visit my cousins and my grandma back in Seoul and Tokyo. I love that you make it so accessible, yet the integrity of the design and the thought process behind the shop and the website —it’s like you spend as much time selling a $4 pen as you do selling a beautiful table that you’ve partnered with a furniture designer on, that’s like $4,000. And I think that speaks to your philosophy—your love of partnerships and collaborations. I don’t know that you could ever set out to achieve that. It’s just one of those things that happens organically, right?

A: Totally. Whatever felt good to us, whatever felt right to us—those are the decisions that we’ve made. And the mistakes we’ve made have been when we didn’t follow our instincts. With an exciting project like Pop-In @ Nordstrom—I mean, I was in Korea at the time when you guys first called, and I was like, “Really?! Wow!”

O: This was kind of a mini dream come true—for us, it’s so exciting that we get to tell your story, through your eyes, to a much larger audience across the country, through a Nordstrom store. You know, we’re a big company, but we can still tell really small, precise, warm stories. It’s similar to what you guys are doing—not that I don’t want to work with better-known artists, but I love the up and coming.

T: I think that even in our ethos at Poketo, we’re not just chasing big names; it’s whatever moves us. 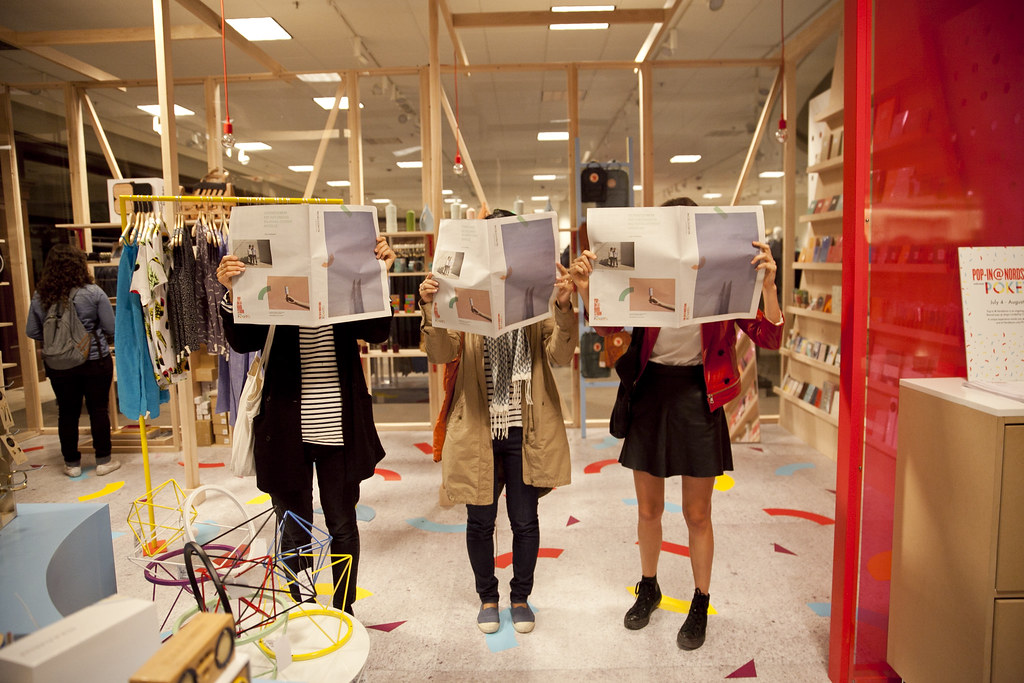 O: So what artists and products are you most excited to bring into the Nordstrom Pop-In Shop?

T: Eric Trine—he’s an amazing furniture designer and object designer here in Los Angeles, and we’ve been working with him for years now. We’re excited to bring in his furniture, Octahedron sculptures, and his leather coasters. We’re also excited about Ben Medansky. He’s a Los Angeles-based ceramicist. We had a show with him at Poketo earlier this year that was incredible. He’s so into doing small, limited runs of really special items; we had some exclusives for Poketo, and we’re doing exclusives for the Pop-In. Also Sonya Gallardo of HighLow Jewelry. Her jewelry is one of a kind, playful and cool.

O: Where do you guys get inspiration from, other than art and design?

T: Food and travel… I think the cool thing about Poketo is that it’s really so much a part of our lives. Angie and I—we can get bored pretty easily, so what drives us in the morning is not knowing what’s going to happen, and embracing that, and just seeing what the universe will unfold—and I think that’s the same for life, right? You want it to be exciting, and fun-filled, and full of travel, food and friends—and I think that’s so much of what we try to have Poketo be. 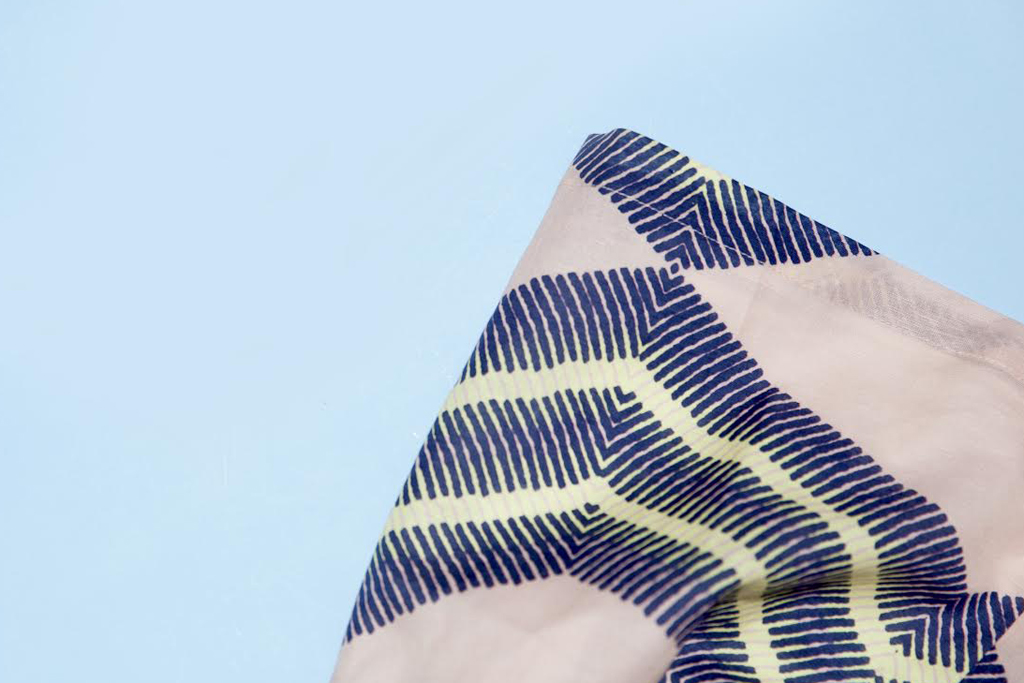 O: You guys LOVE food. I always see the food workshops, like your kimchee-making workshop.

A: My mom teaches that one.

O: That’s amazing. My favorite food is Korean. It’s the only thing I’ll eat. So what’s the wildest food you guys have ever eaten? This is my weird Fear Factor moment. Do you guys remember that show Fear Factor?

O: I just think about all the gross things that they eat; all the amazing places that they go. Then I think about who would be my partner on Fear Factor. In my head, I’m interviewing all my friends, and I’m trying to figure out MY weaknesses, so I can be like, “I need somebody who’s really great at eating slugs. I need somebody who’s not afraid of heights.” I’m always wondering if other people think about that, too. Especially people who eat a lot of funky things and like to travel. 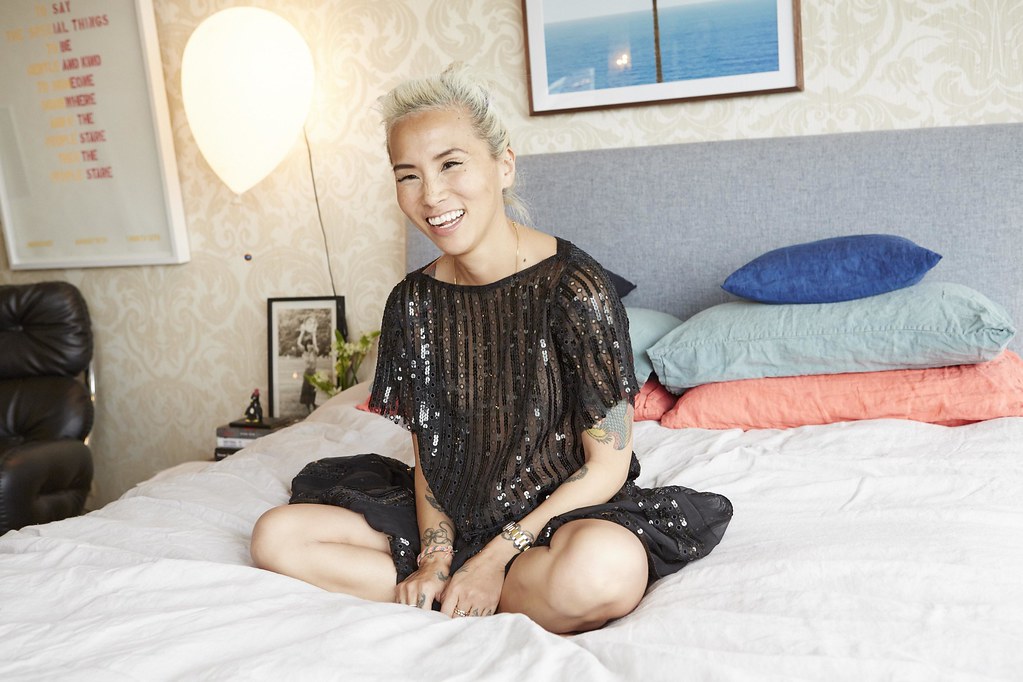 T: You know what’s funny, Olivia? I think about it on Amazing Race. I’m always like, “Oh my god, I would totally win that.”

O: So would Angie be your partner?

T: No, Angie would NOT be my partner.

A: Not at all—I would be horrible. I have no desire to be ambitious physically.

T: I love being the monkey, you know? In the store, I’m the one climbing on the 16-foot ladder, and I’m the one hanging this and installing that.

O: That’s the best part of owning your own business, right? You’re literally changing your own light bulbs, and you’re also traveling the world to try and find amazing new products, while working with some of the most creative people.

T: With Angie and me, I think it’s a really great partnership. I love focusing on the experience—what people are going to feel when they walk into a space. Angie focuses on the products and how people will react to them. It’s nice to be able to have different perspectives, and luckily, we jive in that way. It’s really complementary. 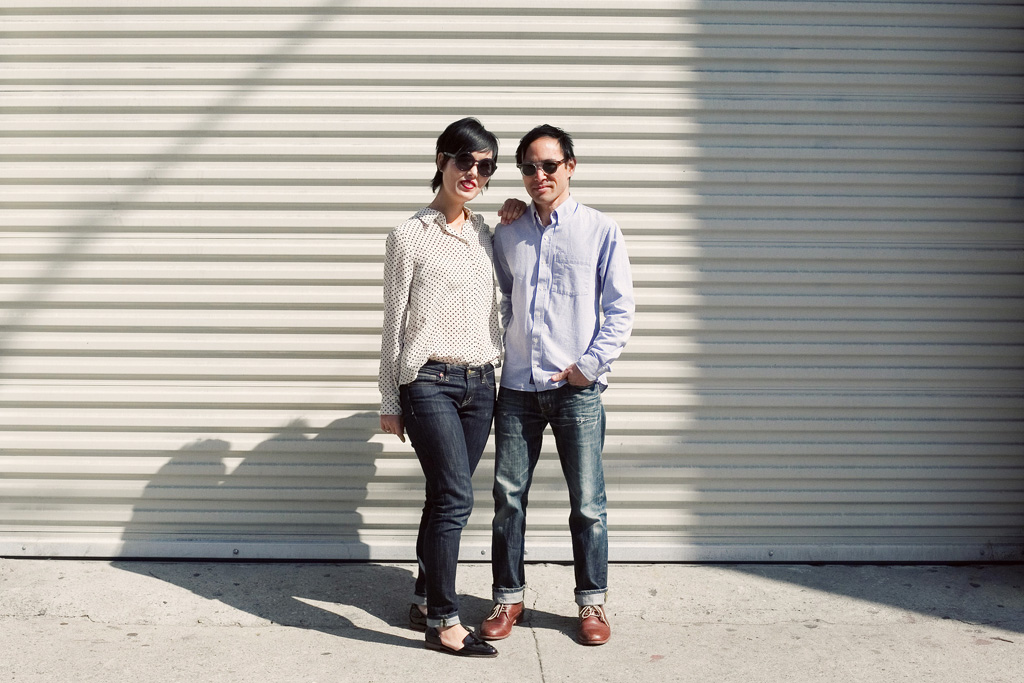